P2154 (S2407). - An Extensive Workup for a Negative Result: A Case of Seronegative Autoimmune Hepatitis 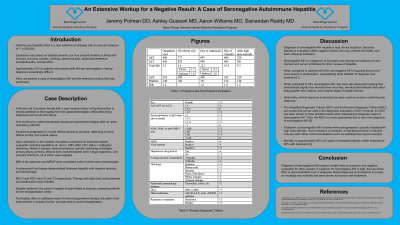 Introduction: Autoimmune hepatitis (AIH) is a rare autoimmune disease with an annual incidence of 1 in 200,000. Symptoms vary based on disease severity, but patients may present similarly to those with cirrhosis. Early recognition is critical as patients with AIH may rapidly progress to acute liver failure if not treated promptly. Approximately 20% of patients who present with AIH are seronegative, making diagnosis exceedingly difficult. Here, we present a case of seronegative AIH and the extensive workup that was performed.

Methods: A 68-year-old Caucasian female with a past medical history of hypothyroidism is directly admitted to the hospital from her gastroenterologist's office after being diagnosed with acute liver failure. One month prior, the patient developed nausea and generalized fatigue after an upper respiratory infection. The symptoms progressed to include diffuse anasarca, jaundice, darkening of urine, diffuse pruritis, and scleral icterus. Upon admission to the hospital, the patient underwent an extensive hepatic evaluation including hepatitis A, B, and C, CMV, EBV, VZV, alpha-1 antitrypsin deficiency, Wilson’s disease, hemochromatosis, primary sclerosing cholangitis, primary biliary cirrhosis, ethanol level, acetaminophen level, fungal organisms, and zoonotic infections, all of which were negative. MRI of the abdomen and MRCP were completed, both of which were unremarkable. A subsequent liver biopsy demonstrated fulminant hepatitis with massive necrosis and hemorrhage. MELD and RDC were 22 and 13 respectively. Therapy with high dose corticosteroids and azathioprine were initiated. Despite treatment, the patient’s hepatic function failed to improve, prompting referral to liver transplantation center. However, after an additional week of immunosuppressive therapy, the patient had improvement in hepatic function and was able to avoid transplantation.

Discussion: As demonstrated in the case, diagnosis of seronegative AIH requires negative evaluation for other causes. If suspicion for seronegative AIH is high, the revised diagnostic criteria are recommended to aid in diagnosis. Rapid diagnosis and treatment is crucial, as mortality is approximately 50% at 5 years in untreated patients. With treatment, this improves to 90%. As the absence of antibodies does not predict the response to treatment, a combination of steroids and immunosuppressants are the preferred therapy for both seropositive and seronegative AIH.