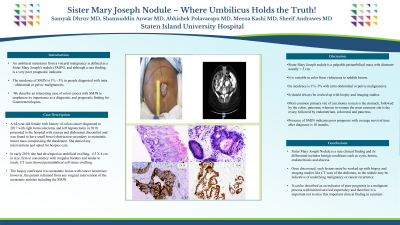 Introduction: An umbilical metastasis from a visceral malignancy is defined as a Sister Mary Joseph's nodule (SMJN), and although a rare finding, is a very poor prognostic indicator in malignancy course. The incidence of SMJN is 1%–3% in people diagnosed with intra-abdominal or pelvic malignancies. Most common malignancies that account for SMJN include gastrointestinal tract tumors ( >50%) of stomach, colon and pancreas followed by gynecological malignancies and tumors with unknown primary.
We describe an interesting case of colon cancer with SMJN to emphasize its importance as a diagnostic and prognostic finding for Gastroenterologists.

Methods: A 64-year-old female with history of colon cancer diagnosed in 2017 who underwent right hemicolectomy and left hepatectomy in 2018 presented to the hospital with nausea and abdominal discomfort. A computed tomography (CT) scan of the abdomen was done showing small bowel obstruction secondary to metastatic tumor mass compressing the duodenum. She denied any chemotherapy or endoscopic intervention and was eventually discharged on the hospice care.
During the hospital stay we also noticed an umbilical ulcerative lesion which was violaceous, 4.5 *4 cm in size, firm in consistency with irregular borders and tender to touch. (#Image 2) So, further history was obtained from the patient about it. In early 2019 she developed localized swelling around the abdomen which gradually enlarged and ulcerated later. She underwent the biopsy of that umbilical lesion (#Image 3). Patient refrained from the surgical resection of the metastatic nodules including the Sister Mary Joseph nodule.

Discussion: Primary site of malignancy associated with SMJN is significantly different in men and women. The most common primary site in men is the stomach, followed by the colon, pancreas, whereas in women the most common site is the ovary, followed by endometrium, colorectal and pancreas. SMJN usually presents as a palpable periumbilical mass with diameter usually not exceeding 5 centimeters in size. It can be variable in color from violaceous to reddish brown. Once discovered, such lesions should be worked up with biopsy and imaging studies like CT scan of the abdomen, as the nodule may be indicative of underlying malignancy or the cancer recurrence. Its presence indicates poor prognosis with average survival time after diagnosis of SMJN is 10 months. Gastroenterologists should be aware of this rare but potential clue of underlying gastrointestinal malignancy. 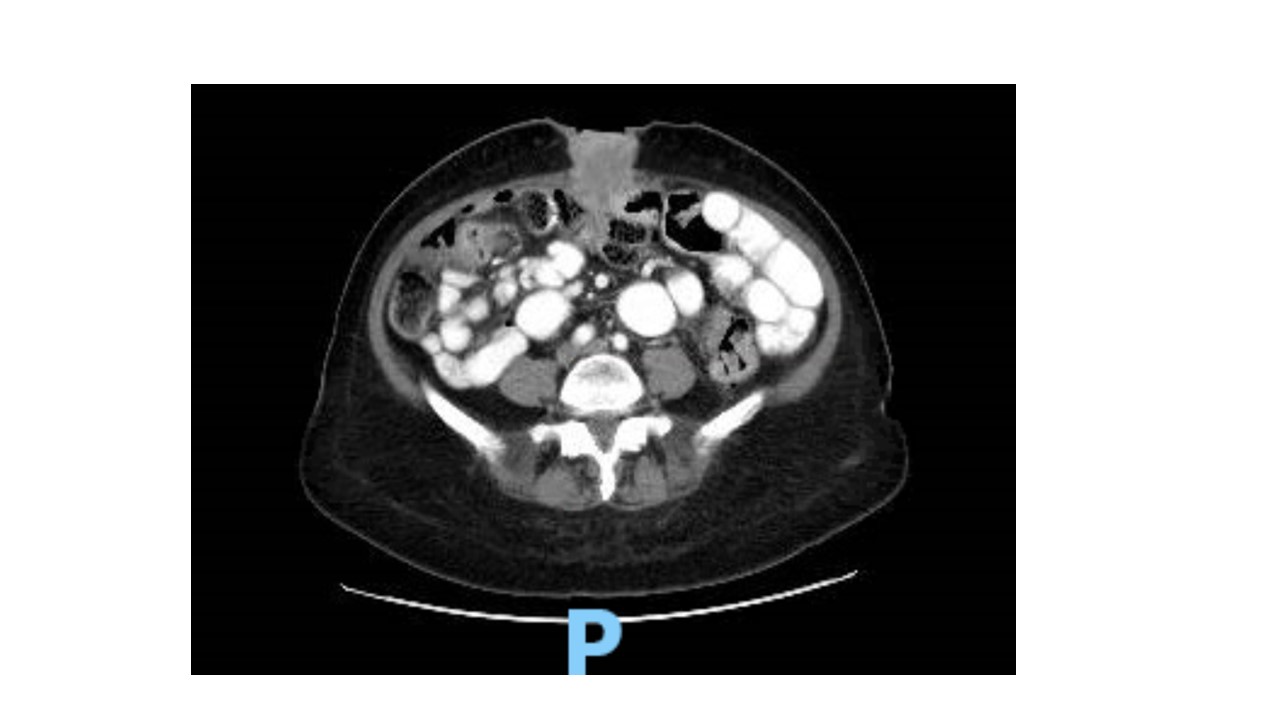 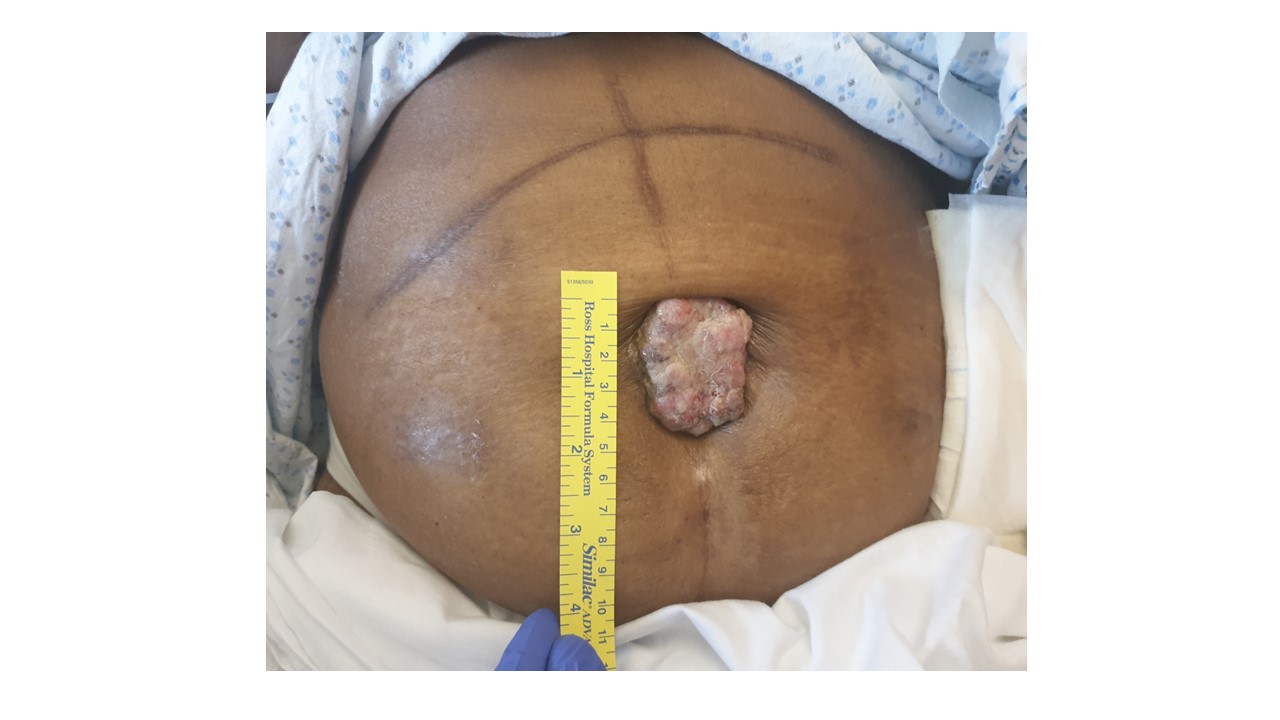 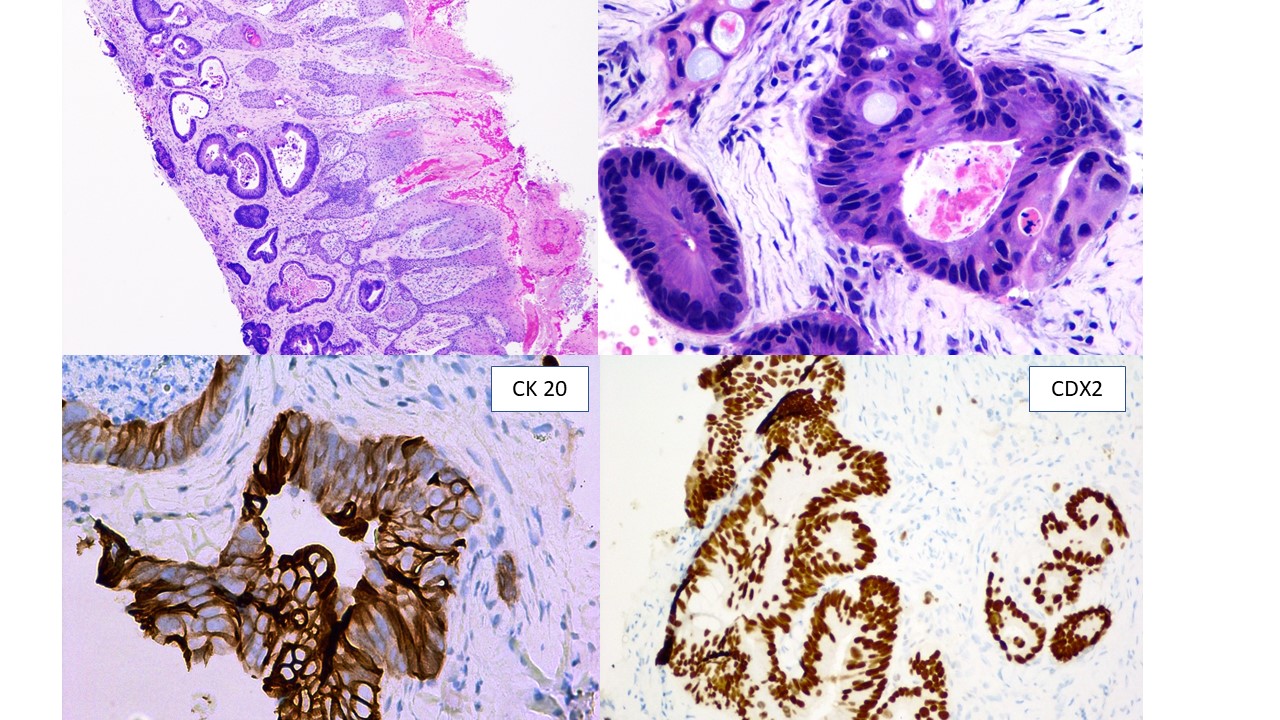 Bottom Panel Images = Immunoprofile showing positivity for the CK 20 and CDX2. These findings are consistent with the Metastasis from the Colonic primary origin.