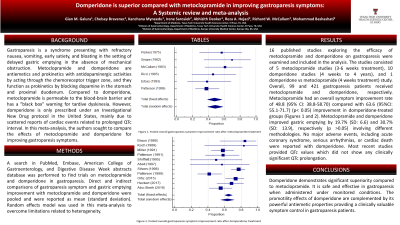 Introduction: Gastroparesis (GP) is a syndrome presenting with refractory nausea, vomiting, early satiety, and bloating in the setting of delayed gastric emptying (GE) in the absence of mechanical obstruction. Medical management of GP is difficult, and the outcome is often poor. Metoclopramide (MCP) and domperidone are antiemetics and prokinetics with antidopaminergic activities. They produce their antiemetic effects through the chemoreceptor trigger zone, and they function as prokinetics by blocking dopamine in the stomach and proximal duodenum. Unlike domperidone, MCP is permeable to the blood-brain barrier and has a "black box" warning for tardive dyskinesia. However, domperidone is only prescribed under an Investigational New Drug protocol in the United States, mainly due to scattered reports of cardiac events related to prolonged QTc interval. In this meta-analysis, the authors sought to compare the effects of MCP and domperidone for improving GP symptoms.

Methods: A search in PubMed, Embase, American College of Gastroenterology, and Digestive Disease Week abstracts database was performed to find trials on MCP and domperidone in GP. Direct and indirect comparisons of GP symptom and GE improvement with MCP and domperidone were pooled and were reported as mean (standard deviation). Random effects model was used in this meta-analysis to overcome limitations related to heterogeneity.

Discussion: Domperidone demonstrates significant superiority compared to MCP. It is safe and effective in GP when administered under monitored conditions. Promotility effects of domperidone are complemented by its powerful antiemetic properties providing a clinically valuable symptom control in GP patients.