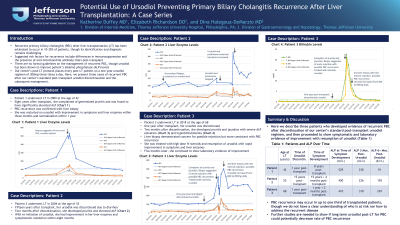 Introduction: Recurrent primary biliary cholangitis (PBC) after liver transplantation (LT) has been estimated to occur in 10-35% of patients, though its identification and diagnosis remains challenging. Suggested risk factors for recurrence include differences in immunosuppression and the presence of anti-mitochondrial antibody titers post-transplant. There are no formal guidelines on the management of recurrent PBC, though ursodiol has been shown to improve patient’s alkaline phosphatase (ALP) levels. Our center’s post-LT protocol places every post-LT patient on a one-year Ursodiol regimen of 300mg three times a day. Here, we present three cases of recurrent PBC after our center’s standard post-transplant ursodiol discontinuation and the subsequent management.

underwent OLT in 2009 at the age of 42; eight years after transplant, she complained of generalized pruritis and was found to have significantly elevated ALP. PBC recurrence was confirmed with liver biopsy. She was restarted on ursodiol with improvement of symptoms and liver enzymes within three months, and normalization within one year.
Patient 2

underwent OLT in 2004 at the age of 53; fifteen years after transplant, her ursodiol was discontinued due to diarrhea. Four months later, she developed pruritis and elevated ALP. With re-initiation of ursodiol, she had improvement her liver enzymes and symptomatic resolution within eight months.
Patient 3

underwent OLT in 2018 at the age of 68; one year after transplant, her ursodiol was discontinued. Two months later, she developed pruritis and jaundice with severe hyperbilirubinemia and ALP elevation. Liver biopsy demonstrated concern for possible rejection but more consistent with PBC recurrence. She was treated with high dose IV steroids and resumption of ursodiol, with rapid improvement in her symptoms and liver enzymes; five months later, she continued to show laboratory evidence of improvement.

Discussion: PBC recurrence may occur in up to one third of transplanted patients, though we do not have a clear understanding of who is at risk nor how to address the recurrent disease. Here we describe three patients who developed evidence of recurrent PBC after discontinuation of our transplant center’s standard post-transplant ursodiol regimen, and then proceeded to show symptomatic and laboratory evidence of improvement with the resumption of ursodiol. 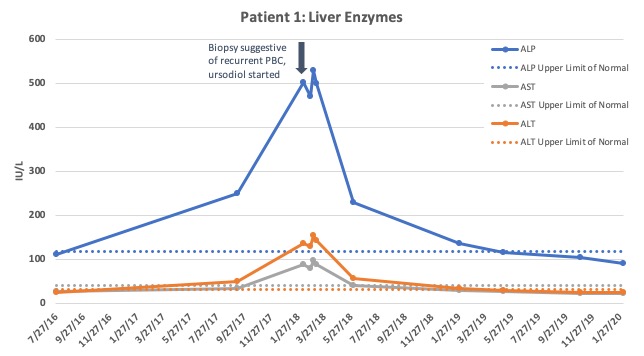 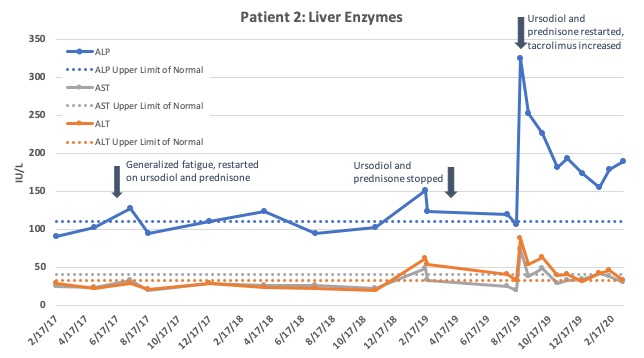 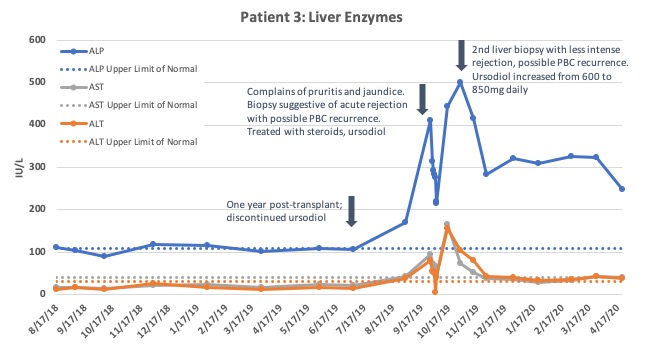