P2853 (S2928). - A Diagnosis of Gastric Inflammatory Myofibroblast Tumor – A Challenge Like No Other! 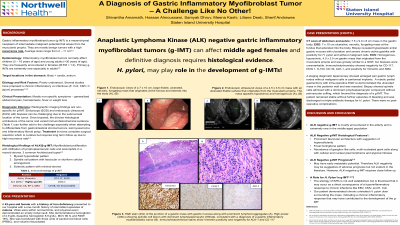 Introduction: Inflammatory myofibroblast tumor is a mesenchymal tumor of intermediate malignant potential. Gastric IMTs (g-IMT) are rare and commonly affect young adults. They are commonly confused with Gastrointestinal stromal tumor (GIST), inflammatory fibroid polyp, and leiomyosarcoma. We present a unique case of a middle-aged female with recurrent hospitalizations for melena due to a gastric mass with atypical features.

Methods:
A 42-year-old female with a history of iron deficiency presented to our hospital with a one-month history of intermittent episodes of melena. Her hemoglobin on admission was 4.9 g/dL (baseline 8.9 g/dL). CT scan of the abdomen and pelvis uncovered a large mass in the gastric body. Endoscopy unveiled a 7x10 cm ulcerative, necrotic, fungating mass at the fundus that extended into the body. Biopsy revealed hyperplastic antral gastric mucosa with ulceration and severe chronic active gastritis with positivity for H. pylori and without malignant cells. An endoscopic ultrasound uncovered a homogenous, hypoechoic, 4.5x3.5cm gastric mass that originated from the muscularis propria and was grossly similar to a GIST, but biopsies were unremarkable. Immunohistochemistry showed negativity for CD-117, S-100, ALK-1, and positivity for Vimentin and SMA. A staging diagnostic laparoscopy showed enlarged perigastric lymph nodes without malignant cells or peritoneal implants.  A robotic partial gastrectomy with intra-operative EGD re-demonstrated the ulcerated mass in the posterior wall and was resected. Biopsy showed spindle cells admixed with a dominant lymphoplasmacytic component without perivascular cuffing, which favored the diagnosis of a g-IMT. The patient remained stable without further episodes of bleeding and was discharged on triple antibiotic therapy for H. pylori. There were no postoperative complications.


Discussion:
ALK-negative g-IMT is mostly encountered in the elderly and is rare in the middle-aged population. The etiology of IMTs remains unclear but is theorized to be due to a hyperinflammatory response to chronic infections like EBV, CMV, and E. Coli. Our patient had H. pylori positive severe chronic gastritis and ulcers surrounding the mass, which can suggest a bacterial led chronic inflammation that may have contributed to the formation of a g-IMT.

Figure 1: Endoscopic views of a 7x10cm, large friable, ulcerated, necrotic, fungating mass that originates at the fundus and extends into the body (A), (B).

Figure 2: Endoscopic ultrasound views of a 4.5 x 3.5 cm mass with an ulcerated friable surface that originates from the muscularis propria. The mass appears hypoechoic and homogenous. 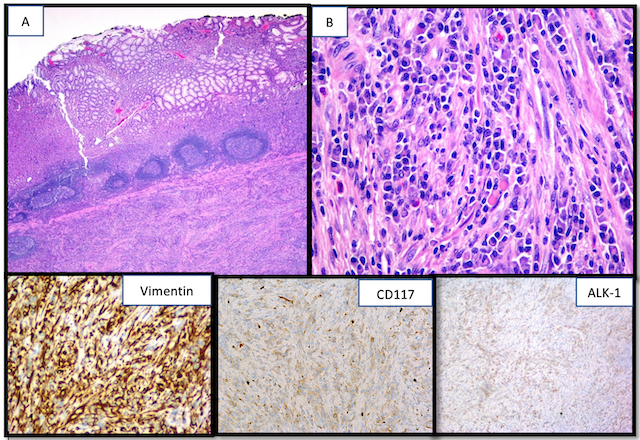