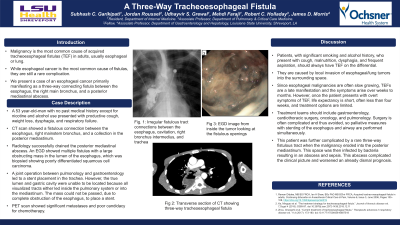 Methods: A 53 year-old-man with no past medical history except for nicotine and alcohol use presented with productive cough, weight loss, dysphagia, and respiratory failure. CT scan showed a fistulous connection between the esophagus, right mainstem bronchus, and a collection in the posterior mediastinum. Radiology successfully drained the posterior mediastinal abscess. An EGD showed multiple fistulas with a large obstructing mass in the lumen of the esophagus, which was biopsied showing poorly differentiated squamous cell carcinoma. A joint operation between pulmonology and gastroenterology led to a stent placement in the trachea. However, the true lumen and gastric cavity were unable to be located because all visualized tracts either led inside the pulmonary system or into the mediastinum. The mass could not be passed, due to complete obstruction of the esophagus, to place a stent. PET scan showed significant metastases and poor candidacy for chemotherapy. The patient was discharged to inpatient hospice.

Discussion: Patients, with significant smoking and alcohol history, who present with cough, malnutrition, dysphagia, and frequent aspiration, should always have TEF on the differential. They are caused by local invasion of esophageal/lung tumors into the surrounding space. Since esophageal malignancies are often slow growing, TEFs are a late manifestation and the symptoms arise over weeks to months. However, once the patient presents with overt symptoms of TEF, life expectancy is short, often less than four weeks, and treatment options are limited. Treatment teams should include gastroenterology, cardiothoracic surgery, oncology, and pulmonology. Surgery is often complicated and thus avoided, so palliative measures with stenting of the esophagus and airway are performed simultaneously. This patient was further complicated by a rare three-way fistulous tract when the malignancy eroded into the posterior mediastinum. This space was then infected by bacteria resulting in an abscess and sepsis. This abscess complicated the clinical picture and worsened an already dismal prognosis. 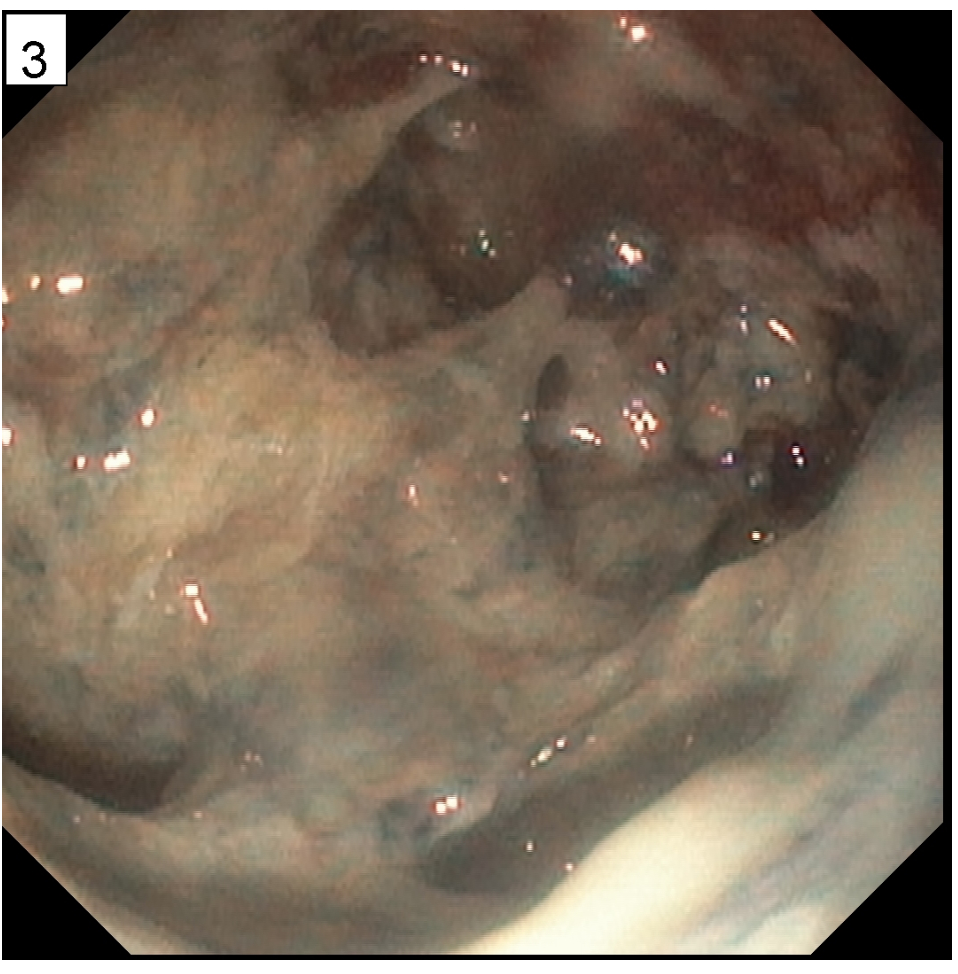 EGD image from inside the tumor looking at the fistulous openings 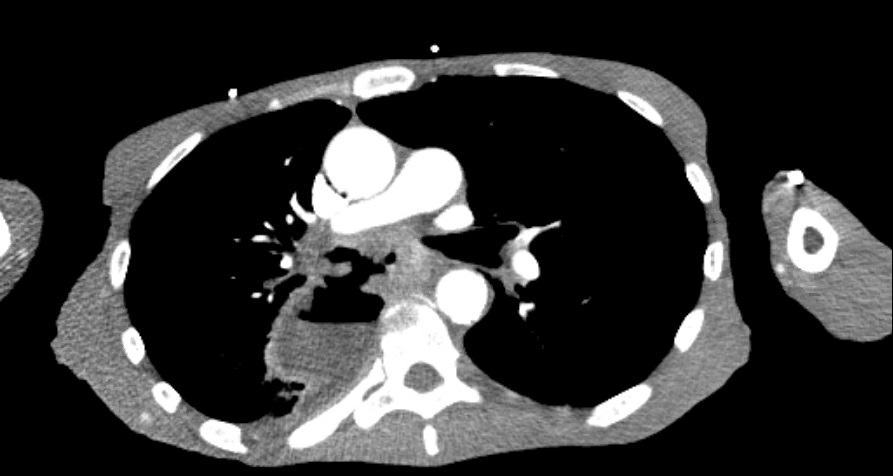 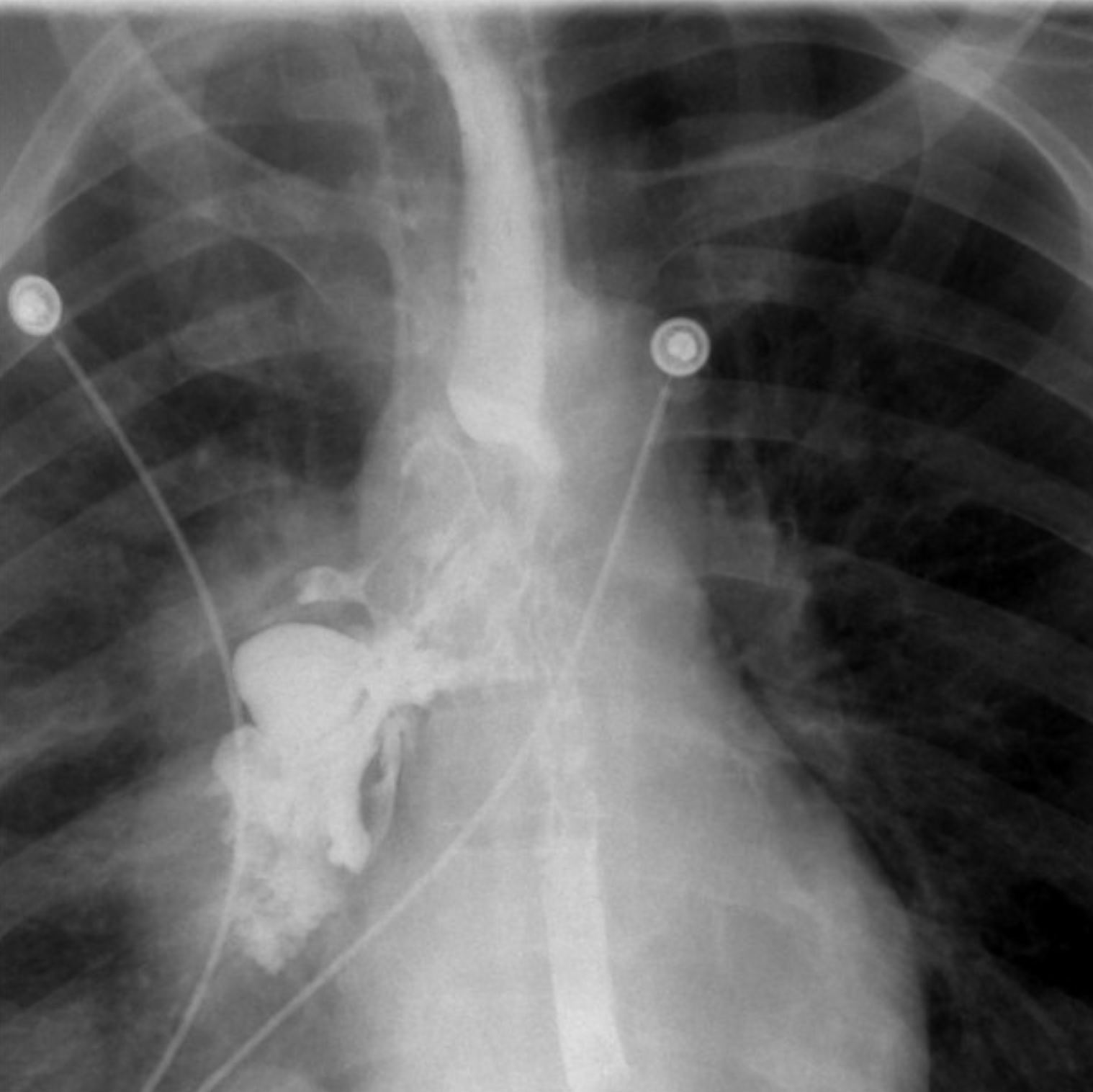