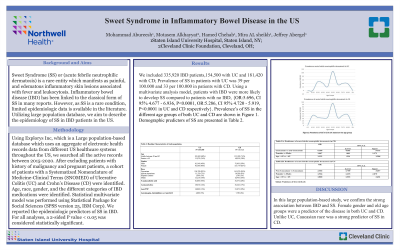 Introduction: Sweet Syndrome (SS) or (acute febrile neutrophilic dermatosis) is a rare entity which manifests as painful, and edematous inflammatory skin lesions associated with fever and leukocytosis. Inflammatory bowel disease (IBD) has been linked to the classical form of SS in many reports. However, as SS is a rare condition, limited epidemiologic data is available in the literature. Utilizing large population database, we aim to describe the epidemiology of SS in IBD patients in the US.

Methods: Using Explorys Inc, which is a Large population-based database uses an aggregate of electronic health records data from different US healthcare systems throughout the US, we searched all the active records between 2015-2020. After excluding patients with history of malignancy and pregnant patients, a cohort of patients with a Systematized Nomenclature of Medicine-Clinical Terms (SNOMED) of Ulcerative Colitis (UC) and Crohn’s Disease (CD) were identified. Age, race, gender, and the different categories of IBD medications were identified. Statistical multivariate model was performed using Statistical Package for Social Sciences (SPSS version 25, IBM Corp). We reported the epidemiologic predictors of SS in IBD. For all analyses, a 2-sided P value < 0.05 was considered statistically significant.

Discussion: In this large population-based study, we confirm the strong association between IBD and SS. Female gender and old age groups were a predictor of the disease in both UC and CD. Unlike UC, Caucasian race was a strong predictor of SS in CD. 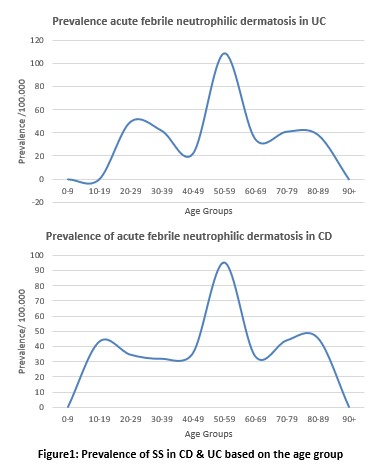