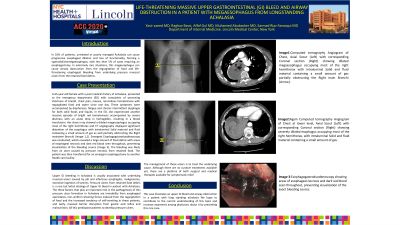 Introduction: In 10% of patients, untreated or poorly managed Achalasia can cause progressive esophageal dilation and loss of functionality, forming a sigmoidolichomegaesopahagus, with less than 5% of cases requiring an esophagectomy. In extremely rare situations, this megaesopahagus can cause airway obstruction from the regurgitation of food and life-threatening esophageal bleeding from underlying pressure mucosal ulcers from the retained food debris.

Methods: A 65 year-old female with a past medical history of Achalasia, presented to the emergency department (ED) with complaints of worsening shortness of breath, chest pain, nausea, non-bilious hematemesis with regurgitated food and water since one day. These symptoms were accompanied by diaphoresis, fatigue and chronic intermittent dysphagia for both solid foods and liquids. In the ED, she experienced another massive episode of bright red hematemesis accompanied by severe dizziness with an acute drop in hemoglobin, resulting in a blood transfusion. Her chest x-ray showed a dilated megaesophagus occupying most of the right hemithorax and CTangiography displayed significant distention of the esophagus with intraluminal Solid material and fluid containing a small amount of gas as well partially obstructing the Right mainstem Bronchi (Image 1,2). Emergent Esophagogastroduodenoscopy was conducted, which revealed a large amount of food debris with areas of esophageal necrosis and dark red blood seen throughout, preventing visualization of the bleeding source (Image 3). The bleeding was likely from an ulcer caused by pressure necrosis from retained food. The patient was then transferred for an emergent esophagectomy to another Health care facility.

Discussion: Upper GI bleeding in Achalasia is usually associated with underlying mucosal ulcers caused by pill and infectious esophagitis, malignancies, excessive ingestion of tannins. Pressure ulcers from retained food debris is a rare but lethal etiology of Upper GI bleed in patient with Achalasia. The three factors that play an important role in the pathogenesis of this pressure ulcer formation in Achalasia are immobility from esophageal aperistalsis, non-uniform shearing forces induced from the regurgitation of food and the increased tendency of self-vomiting in these patients, and lastly, mucosal barrier disruption from gastric acid reflux and malnutrition. We hope to contribute to the current understanding of this topic and increase awareness among physicians about it by presenting this rare case. 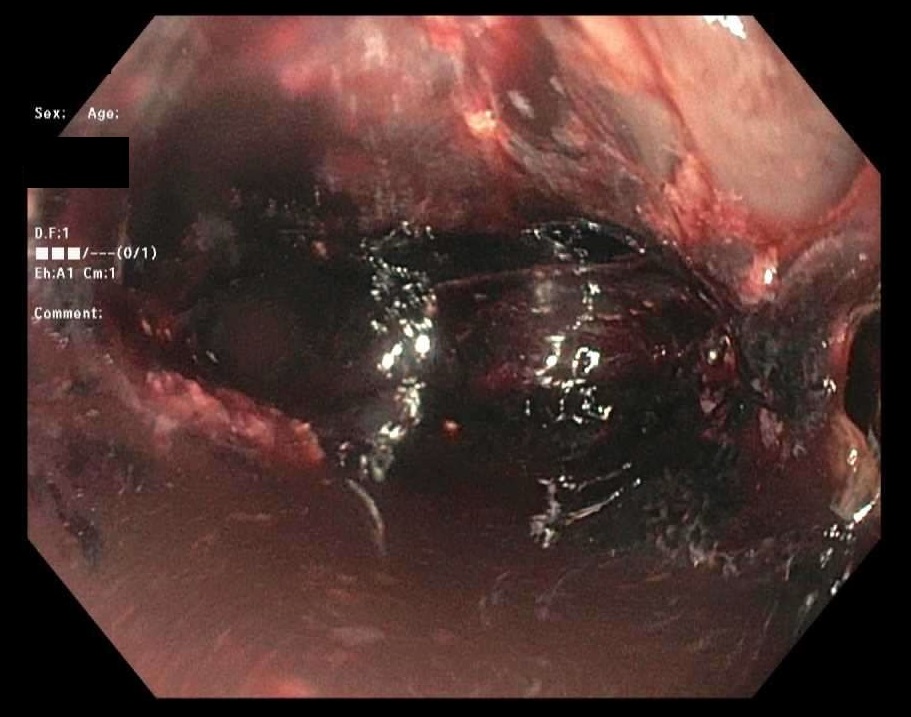