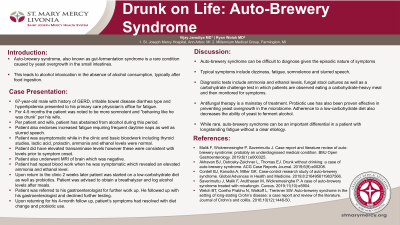 Introduction: Auto-brewery syndrome, otherwise known as gut-fermentation syndrome, is a rare condition where yeast overgrowth in the small intestines leads to ethanol fermentation in the gut, leading to alcohol intoxication in the absence of alcohol consumption.

Methods: A 67 year old male with past medical history of gastroesophageal reflux disease (GERD), irritable bowel disease diarrhea type (IBS-D) and hyperlipidemia presented to the office with a chief complaint of fatigue. For 4 to 5 months, the patient’s wife noticed the patient would be sleeping more often than normal and was behaving “like he was drunk”. Both the patient and his wife stated that the patient had not been drinking alcohol on days he experienced symptoms. He also felt increased fatigue and required long naps, typically waking up with slurred speech. He was asymptomatic in the office and initial bloodwork included thyroid studies, lactic acid, prolactin, ammonia and ethanol levels were all normal. A hepatic function panel was ordered which revealed slightly elevated transaminases which were consistent with levels prior to the onset of symptoms. Patient also underwent MRI of the brain which was negative. Patient was told to have repeat blood work drawn when he was symptomatic. Repeat blood work revealed an elevated ammonia and alcohol level. On a repeat visit 2 weeks later he was started on probiotics as well as a low-carbohydrate diet and referred to his gastroenterologist for further workup. He was advised to obtain a breathalyzer and log alcohol levels after meals. Patient saw his gastroenterologist and declined any diagnostic workup. At his 4 month follow up patient stated he no longer had any symptoms.

Discussion: Auto-brewery syndrome can be difficult to diagnose given the episodic symptoms. Typical symptoms include dizziness, fatigue, somnolence and slurred speech. Diagnostic tests include alcohol and ammonia levels, fungal stool cultures as well as a carbohydrate challenge test, in which patients are observed eating a carbohydrate-heavy meal and monitored for symptoms. Antifungal therapy is a mainstay of treatment. Probiotic use has also proven effective, helping to prevent yeast overgrowth in the gut microbiome. Adherence to a low-carbohydrate diet also can alleviate symptoms by decreasing the ability of yeast to ferment ethanol. While gut-fermentation syndrome is a rare clinical disease, it can be an important differential in a patient with longstanding fatigue without a clear etiology.