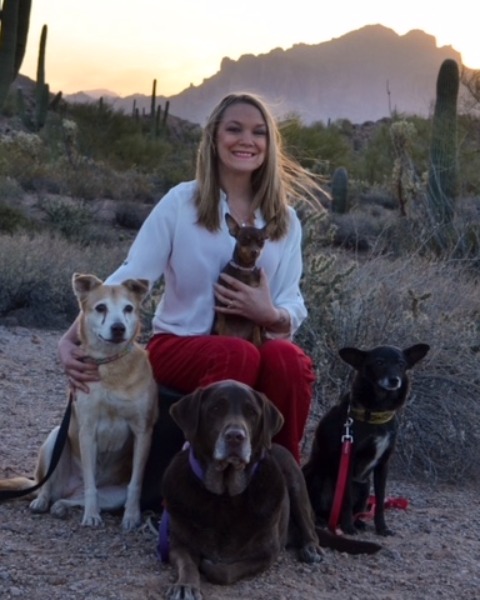 Jessie is originally from North Dakota, but grew up primarily in Rapid City, SD. She graduated in 2009 with an Associate’s Degree in Applied Science with an emphasis in veterinary technology. While in school, she acquired her first dog, Sage, who was a patient the students practiced on and Jessie formed a special bond with her. After graduation, she worked in general practice in South Dakota and moved to Arizona in 2010 with Sage and one cat, Ivy. She has since acquired 3 more dogs and 1 cat (Sadie, Basil, Myka, and Lil' Petey Pablo), who fit into the family perfectly. Jessie joined Desert Veterinary Medical Specialists in 2012 and has been a great asset to the team. She found a passion for veterinary nutrition and believes it truly is the fifth vital sign in patient care. She then went on to pursue a VTS in nutrition because she believes that we need more awareness about how truly vital nutrition is to every patient, every time. Jessie has achieved many awards throughout her career, including the Dana Award for human animal bond. She was the president of the student chapter of NAVTA while in college, and has continued to be an active member of NAVTA and of the American Academy of Veterinary Nutrition Technicians. Jessie is outgoing, friendly, and her attitude and kindness really show that she loves what she does. In her free time she loves to be outside with her pets, riding her bicycle, and swimming with her dogs in the pool or reading on the sideline.