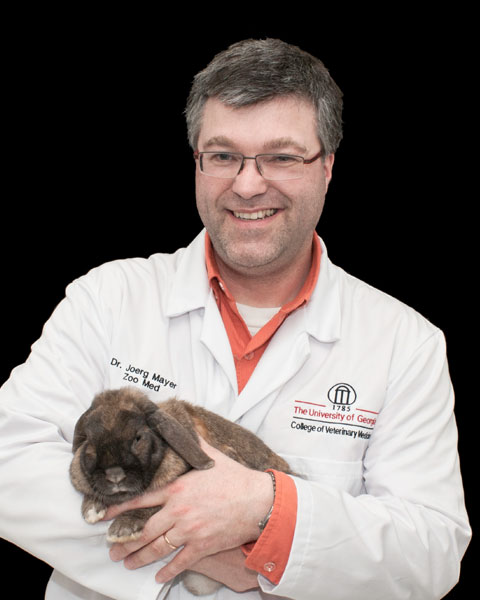 Dr. Joerg Mayer grew up in Germany where he received his primary education. He went to Budapest/Hungary to study veterinary medicine shortly after the “iron curtain” fell. After he received his doctoral degree from the University of Budapest/Hungary, he went to the USA for an internship in “Zoological Medicine and Surgery” at the Roger Williams Park Zoo in Providence, RI. At the end of the internship, he was part of a research team to study wild tree kangaroos in the rainforest of Papua New Guinea for three months. The Master’s project which focused on lead toxicity in the common loon, brought him to the Tufts Wildlife Clinic in the USA. After 10 years at Tufts University, he moved to Athens, Georgia in 2010 to take the job of Associate Professor in Zoological Medicine at UGA. Dr. Mayer qualified with the first batch of specialists in Exotic Companion Mammals as a Diplomate of the American Board of Veterinary Practitioners; in addition he is also a Diplomate of the American and the European College of Zoological Medicine. Since 2012, he is also an International Fulbright Specialist in Zoological Medicine. Dr. Mayer published many scientific articles, book chapters, some of which have been translated into French, Spanish and Portuguese. His latest book, the “Veterinary Clinical advisor for birds and exotic pets,” was published in early 2013 and contains over 750 pages. In 2013, he received the Exotic Speaker of the Year award by the NAVC. In 2016, he received the Oxbow/AEMV Exotic Mammal Health Award, an annual award to recognize excellence and innovation in the field of exotic mammal health.