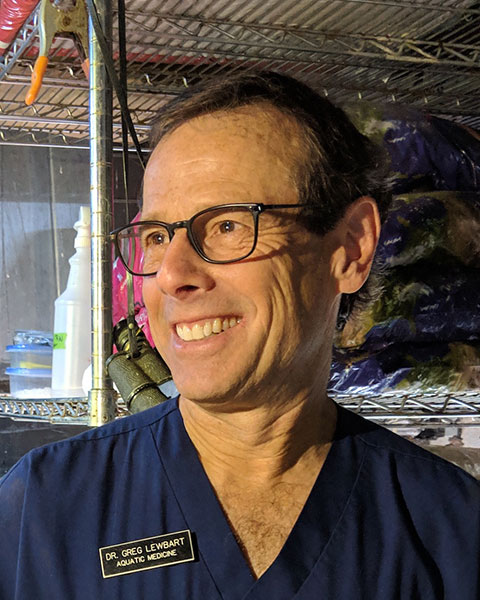 Greg received his BA in biology from Gettysburg College in 1981, an MS in biology with a concentration in marine biology from Northeastern University in 1985, and a VMD from the University of Pennsylvania School of Veterinary Medicine in 1988. He worked for a large wholesaler of ornamental fishes before joining the faculty at the North Carolina State University College of Veterinary Medicine in 1993, where he is Professor of Aquatic Animal Medicine and an Assistant Clinical Sciences Department Head. He is a Diplomate of the American College of Zoological Medicine and the European College of Zoological Medicine and in 2007 was named Exotic DVM of the Year by Exotic DVM Magazine. In 2012, he received the William Medway Award for Excellence in Teaching from the International Association for Aquatic Animal Medicine. Greg is an author on over 150 popular and scientific articles about invertebrates, fishes, amphibians, and reptiles and speaks locally, nationally, and internationally on these subjects. He’s also authored or co-authored 27 book chapters related to veterinary medicine of the above-mentioned taxonomic groups and edited or co-edited five veterinary textbooks: Self Assessment Colour Review of Ornamental Fish (Manson Publishing and ISU Press, 1998), Self Assessment Colour Review of Ornamental Fish & Aquatic Invertebrates (CRC Press, 2017), Rapid Review of Exotic Animal Medicine and Husbandry (Manson Publishing, 2008), and the multiple award winning Invertebrate Medicine (Wiley-Blackwell Publishing, 2006; 2012). Greg has made 14 trips to the Galápagos doing field work on a wide variety of species.